HANGZHOU, Feb. 5 (Xinhua) — South African doctor Brett Lyndall Singh left the Chinese hospital at 6:30 p.m. after another busy day. The coronavirus outbreak had quieted the city, with few pedestrians on the streets.

“Now the city needs me.” Here’s a message from a South African doctor, who has chosen to stay and hold his ground in the wake of the epidemic.

He has spent nine years studying and working in the city, and chose to stay and hold his ground in the wake of the epidemic. 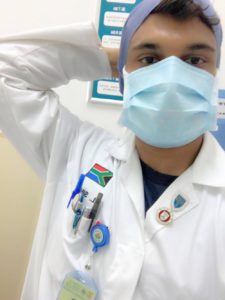 Brett Lyndall Singh poses for a selfie after work.

“I’m a doctor and it is Wenzhou that made me who I am,” Singh said. “Now the city needs me.”

Determined to study medicine as a child, he came to China and studied at WMU as an international student in 2011. He has worked in the hospital since 2016, where he sees more than 50 pediatric patients every day.

Over the past three years, many local residents in Wenzhou have received medical treatment from the foreign doctor who can speak fluent Chinese.

As the hometown of numerous merchants nationwide and all around the world, Wenzhou has nearly 2.5 million people living outside the city, incomplete statistics showed.

According to a local government official, about 20,000 Wenzhou people returned to Wenzhou from Wuhan, the worst-affected area in the epidemic, before the Spring Festival.

The city has the highest number of confirmed cases of novel coronavirus infection among prefecture-level cities except those in Hubei Province in China, with a total of 364 confirmed cases reported by the end of Feb. 4.

Although Singh was not assigned to treat patients infected by the novel coronavirus, he has been treating other patients. The foreign doctor also provides online medical consultations via WeChat.

“People I know in Wenzhou did not flinch,” he said. “Everyone is fighting.”

Since the outbreak of the epidemic, Wenzhou people from all over the world have donated money and supplies through various channels to support Hubei, Zhejiang and other places.

“People have reduced their outdoor activities as requested and wear masks in public spaces. The suspected cases have been transferred to designated hospitals,” Singh said.

The city has so far seen 17 patients discharged from hospital after recovery.

“People in Wenzhou are not panicked,” Singh said. “I have faith in this city.”  ■